Here’s your chance to WIN a signed & personalized copy of  ‘Mixed Up With Murder,’ by author Susan Shea! 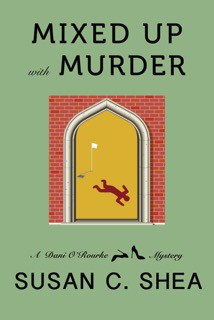 Susan is yet another example of a woman whom made her dream life her reality.  She spent more than two decades as an executive and a consultant in higher education, writing for work, but reading crime fiction and wishing she could try her hand at it. Finally, having overcome her fear of becoming a penurious “bag lady” by aggressively saving funds, she quit the day job and began writing what became her best-selling mystery series featuring Dani O’Rourke, a divorced woman and professional fundraiser for a fictional museum in San Francisco. The first book was published in 2010 and the third comes out February 2. MIXED UP WITH MURDER is dedicated to her sister, Candida, a We Move Forward alumna, and Susan will give away a copy to one of our newsletter readers in her honor.

Enter your name & email address now or no later than today, Wednesday, January 27, 2016 by 11:59 pm Eastern Standard Time, and your name will be entered into the draw!

Susan is still moving forward, this time with a new series that a major publisher will debut in 2017 and as the secretary of the national Sisters in Crime board. She’s a member of Mystery Writers of America, blogs on 7CriminalMinds (http://7criminalminds.blogspot.com) and has a web site that lists all her books, upcoming events, and news:  www.susancshea.com

Come & be among like-minded and good-spirited women, who together experience insight, inspiration, and fun.  In its 5th year, WMF is creating waves of positive change, personally, professionally, individually and collectively.

Have a question or comment? We would love to hear from you. Email us at info@wemoveforward.com

What women are saying